What is PEX Pipe – An Overview

Home > Blog > What is PEX Pipe – An Overview 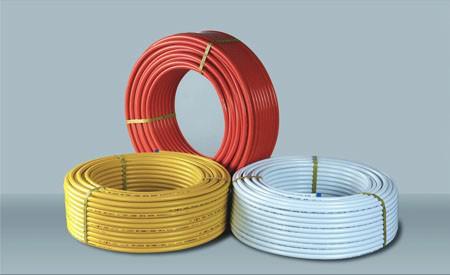 The prices for copper pipes are increasing rapidly with every day, that’s why more economical alternative is needed. Such an alternative was found in PEX plumbing systems. Cross-linked polyethylene, PEX, has become more common because of its ease of use and less fittings. For instance, PEX is easily bent around corners where a copper or polyvinyl chloride (PVC) pipe would need an elbow fitting. This means simpler and faster installation of PEX pipes in comparison with copper or PVC plumbing systems.

What is PEX Pipe?

PEX is an abbreviation for crosslinked (X) polyethylene. It is a flexible, resilient, tried-and-true piping product that has been utilized in plumbing for the past 20-30 years. PEX tubing won’t scale or corrode and it also suggests potential freeze-damage protection due to its flexibility.

Most plumbing systems present PEX-A tubing, which is believed to be the top-quality PEX tubing method for cross linking in the manufacturing industry. This method uses organic peroxides that produce reactive free radicals during heating process which join PE chains together during extrusion. PEX-A is the most adaptable of all PEX types, since expansion fittings can be used on it due to its shape and thermal memory. They only get stronger and highly leak-resistant with time.

History and Use of PEX Tubing

Cross-linked polyethylene (PEX) was originally invented in the 1950’s. At first it was promoted in Europe as an alternative to copper in the heating and plumbing industries. In the USA PEX has been used since the 1980’s for radiant heating systems installed in the slab under floors. Interest in PEX for hot and cold water plumbing has been increasing ever since, replacing copper pipes in many applications. PEX is a strong ductile material which can withstand temperatures as low as -20 C (-4 F) without bursting. However, it is susceptible to UV light and needs to be protected by insulation to avoid decay.
PEX versus Copper

Copper and PEX materials are presently more common in plumbing industry in comparison with galvanized pipes that have become an outdated option for repiping. A typical homeowner is more familiar with copper which is reliable, solid, resists corrosion and fire well. Many homeowners still choose copper over PEX, but if you are looking for a worthy alternative to copper, try PEX and you won’t be disappointed. It is light, colorful and flexible, simpler to install and cheaper than copper.

However, both copper and PEX resist corrosion better as opposed to other metal piping systems.

There is nothing perfect on this Earth, and failures in PEX plumbing systems have been observed throughout the years of their usage. It is worth knowing about these failures in order to prevent them from occurring in your PEX systems.

Failures were found in two areas – the pipe and the fitting. The pipe can fail during its exposure to high amounts of chlorine within the water, or because of its exposure to sunlight before installation. In addition, PEX pipe has also proven to be penetrable when subjected to some solutions, including oxygen and some petroleum products. As a result toxic chemicals can be leached from the pipe material. In case with the fitting failure, the main reason why a brass fitting that is used with PEX fails is because of dezincification. This causes the fitting to corrode and over time create leaks.

The most important aspects of PEX pipes were discussed in this article and we hope you find the information useful. If you ever need repiping services for your home or business facility, at Brea/OC Plumbing Heating & Air Conditioning our repiping pros are capable of dealing with both copper and PEX. Contact us today!

FIND US ON SOCIAL MEDIA

Excellent service! The lady on the phone was nice and polite. Our tec called promptly on a Saturday told us he was booked but if had any cancellations he would call us and see if he could come. I told him we can wait till Monday. He came with his partner and took a look at the unit and explained to me in terms I would understand what needed to be fixed and went right to work. Thank you!!!